The Wildfox Couture sample sale. I waffled on whether or not to go. I heard it was really crowded, hot, sweaty, and that there were long lines no matter what time you went. I had never gone to one of their sales because I thought it wouldn’t be worth it. But when you look at the retail price of Wildfox Couture clothing, and then at their sample sales everything is $50 or less, it’s hard to resist.

I normally plan ahead and go early to these sales so I’m not number 500 in line, but a friend asked me if I wanted to go hiking (I use that word very loosely) on Friday morning, day 1 of the sample sale. I thought I should get off my lazy butt and get some exercise, and I figured I can always go to day 2 of the sale on Saturday.

So on Saturday, I was too lazy to get up early to go to the sale in the Fashion District, and reasoned that since there wasn’t anything I absolutely HAD to get from Wildfox, I would just take it easy. I got to the Cooper building around 12:30 PM (sale opened at 10) and there was no line at all! I walked right into the room. There were a lot of people in there, but the sales room was big enough that I had plenty of space to walk around. 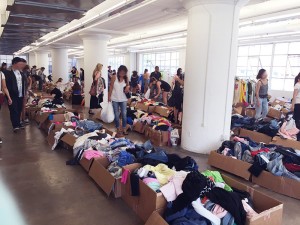 I posted a cropped version of this picture on Instagram, but it doesn’t capture how much merchandise was in the room. Multiply the amount of boxes in the photo times 3; it doesn’t even show the massive denim corner with jeans in different fits and finishes or the swimwear section.

I spent about an hour and a half going through boxes and racks and trying on clothes. There were no fitting rooms so people just tried on clothes wherever there was space to do so. The one thing that I was surprised by was that the clothing wasn’t organized by size at all, so you had to rummage around. It made for quite an adventure, and I dug around in lots of boxes and found stuff I normally wouldn’t have otherwise. I’m sure if you didn’t have a lot of time, the lack of organization by size would have been frustrating. One exception was the denim section — they had tubs labeled with sizes so that made it easier to find jeans in your size. Two-piece bathing suits were not attached together; I found a bikini bottom I liked but couldn’t find the matching top so I put the bikini bottom back.

I thought the best deal was on the denim. Denim (including jeans, jean shorts, overalls) was a flat $25, and buy 2, get 1 free. I bought 2 pairs of skinny jeans (each normally about $169!) and a pair of distressed pastel tie-dyed shorts (originally $110). I’ve tried Wildfox jeans before, and the Marianne fit is my favorite because it’s mid-rise and the fabric is soft and comfortable.

After going through a ton of boxes looking for different types of rainbow printed items (haha), I was finally done. It also got really hot in there (there was air conditioning but it was spotty), so I was glad I wore shorts and a t-shirt. Below are some photos of my haul. I’m pretty happy that for less than the price of one pair of Wildfox jeans, I got so much stuff! 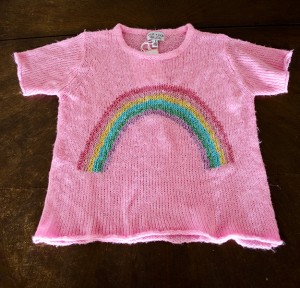 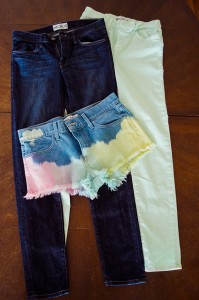 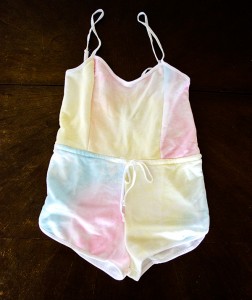 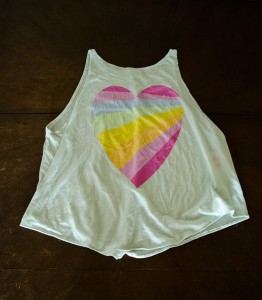 Over the rainbow Cassidy tank, free (originally $60. The clerk accidentally overcharged me by a few bucks on the jeans and instead of voiding the transaction which would have taken too long, he gave me the tank top for free for his mistake!)