My husband and I both grew up on the East Coast (suburbs of Philadelphia for him, suburbs of Washington, DC for me). We live in Los Angeles now but go back home several times a year. We’re at the age now where everyone we know is getting married, so the visits home have been more frequent the past few years for all the weddings.

A few weekends ago we flew back to Ross’s hometown of Doylestown, a sleepy and picturesque suburb of Philadelphia, for his friend’s wedding. Doylestown is very idyllic and much more rural than from where I grew up. It’s a very old town with beautiful homes (some from the 18th and 19th centuries), with a cute downtown area with lots of restaurants.

When we first started dating, I would visit him in Doylestown during the summer between semesters in college and he took me to his favorite spots, which have become my favorites as well. During this trip back home, we visited a few favorites and tried a new restaurant. 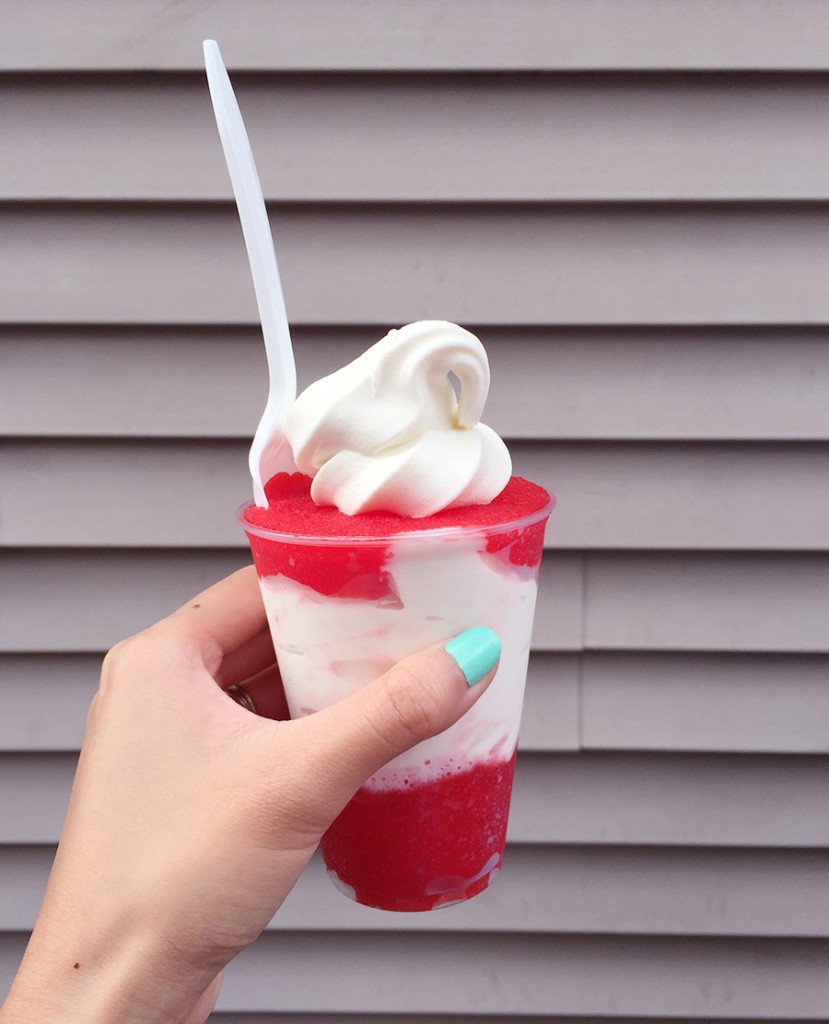 Water ice is a regional Philadelphia thing, different than snow cones and shave ice. It has a finer, almost liquidy texture with the subtle granular texture of finely shaved ice. It is not the same as Italian ice.

Annie’s has been around forever in Doylestown, since Ross was a kid. They always have a bunch of different fruit flavors on the menu, and you can get a gelati, which is water ice layered with soft-serve ice cream. It’s really cheap too. A few years ago they had a strawberry lemonade flavor and it was SO refreshing and tasty but I’ve never seen the flavor pop up again. This most recent visit, they had strawberry available (which is rare!) so I had to order that.

Pictured: Strawberry gelati with vanilla soft-serve. Price varies depending on size and toppings. $1.50-$5 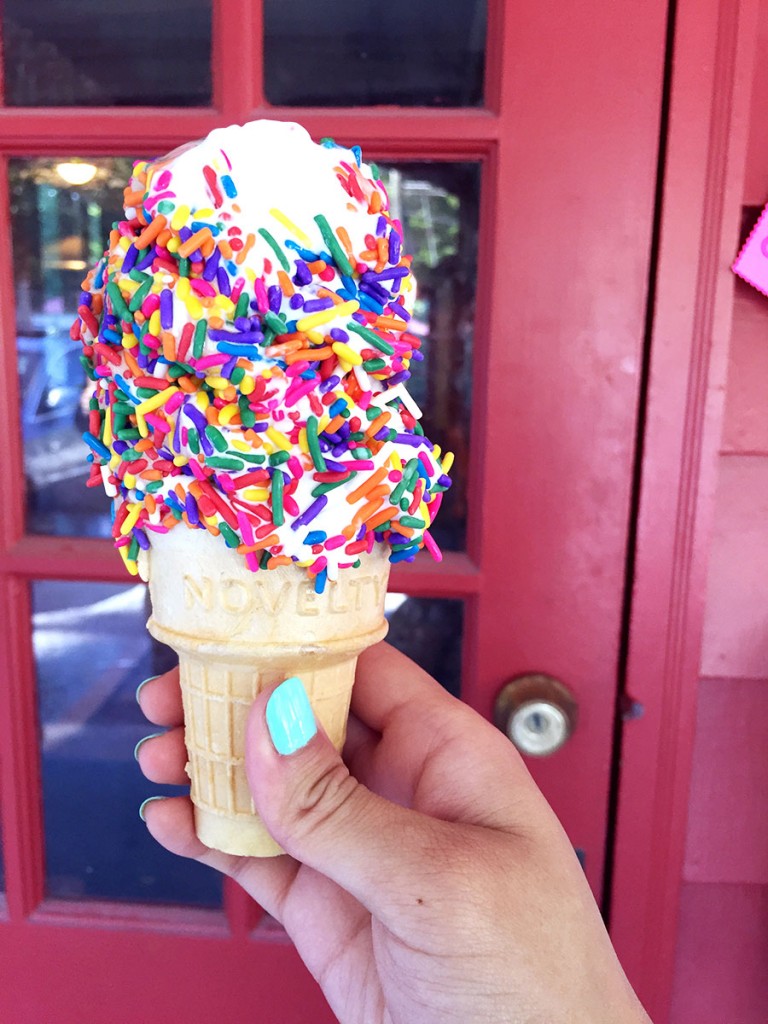 Another local favorite, mainly known for their soft-serve ice cream drowning in rainbow sprinkles (or jimmies, but where I grew up they were called sprinkles!). They sell other typical American fast-food fare like burgers, hot dogs, fries, etc., but we come here for the massive soft serve cones.

After eating some ice cream, take a walk on the bridge that crosses over to New Jersey! It’s a very scenic walk over the Delaware River. 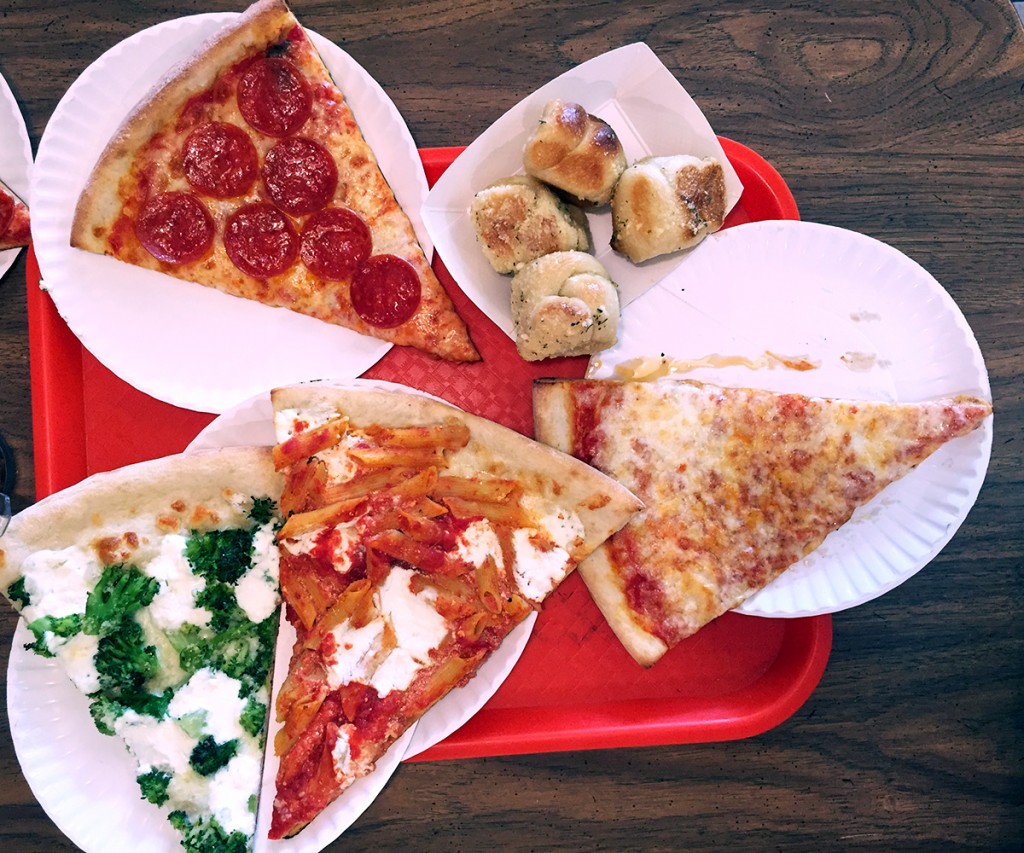 Pizza in Los Angeles just doesn’t taste the same as it does on the East Coast. Maybe it’s because there isn’t a dense concentration of Italian-Americans here as there is in the major cities of the East Coast like New York and Philadelphia. Pizza in LA tends to be pretty meh at its best, and horribly disgusting at its worst. California Pizza Kitchen was created here after all, and who really thinks that CPK makes authentic pizza?

Ross grew up with multiple local pizza places in Doylestown and he took me to Pina’s early on in our relationship; I guess even then he knew how to win me over with food. I always go for a cheese slice and some (okay, a LOT of) garlic knots.

This is not the paper thin, crispy “flatbread” you can get in a lot of LA restaurants (flatbread =/= pizza) nor is it that really doughy, bread-heavy dense stuff you get from the major chains like Domino’s. It’s got the right thickness, not too much crust, and a good balance of tomato sauce and cheese.

Their garlic knots are also addictive, and I could pretty much eat several orders of them.

My sister-in-law lives in another suburb of Philadelphia close to Doylestown, and we went to dinner with family in downtown Ambler, which is a very cozy and cute area with lots of restaurants, cafes, and an arthouse theater.

Forest and Main is a brewpub restaurant converted from an old rowhome and is adorably decorated. I wish I had taken more photos of it but it has a really quaint charm to it. It serves a small rotating menu of New American cuisine and a craft beer menu.

For appetizers, the table shared a white bean dip/veggie plate and onion rings. 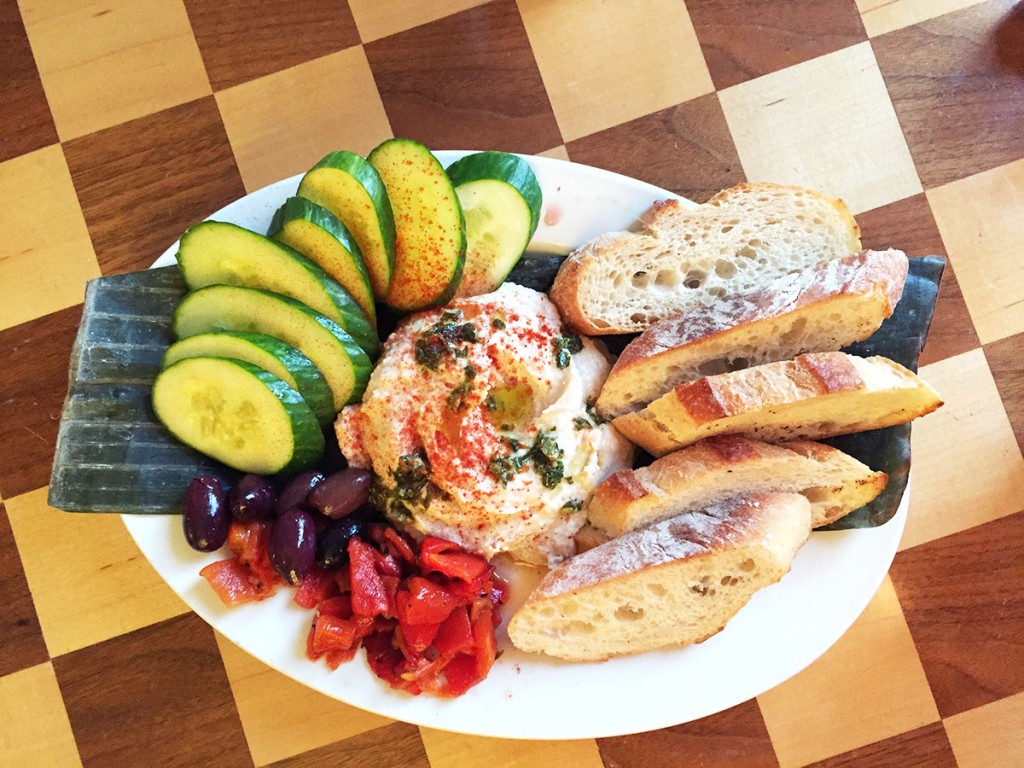 Ross ordered the tofu banh mi with fries, and I ordered the vegetarian chili with cornbread and honey butter on the side. The tofu banh mi was not too authentic; it was more like an American-style sandwich with some mild Asian flavors. Ross said it was still good though, but obviously not similar to a banh mi you would get at a Vietnamese banh mi shop. The fries were great (I love French fries). They were crispy on the outside, with soft interiors and a nice crunch to them. The aioli dip was a nice touch as well.

My vegetarian chili was very hearty, super filling without any meat. There were several kinds of beans and chopped up summer squashes and zucchini. The cornbread and honey butter (not pictured) that accompanied it was also quite good. The cornbread had a crispy outer to it which makes me wonder if they cook it using a cast-iron pan. 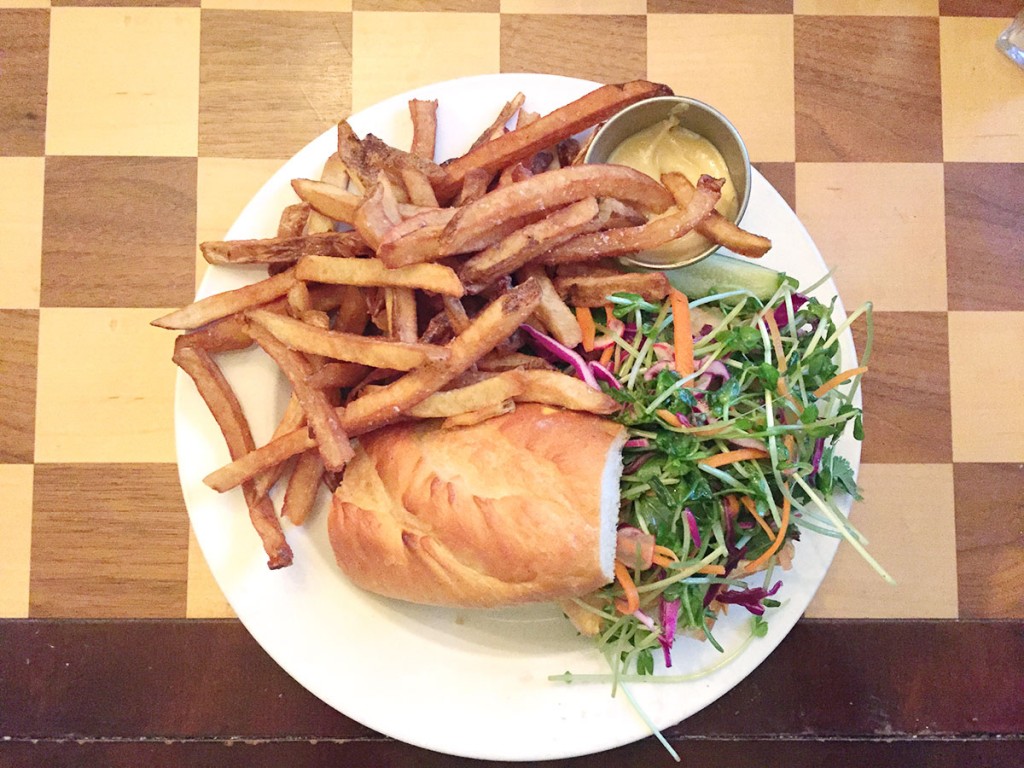 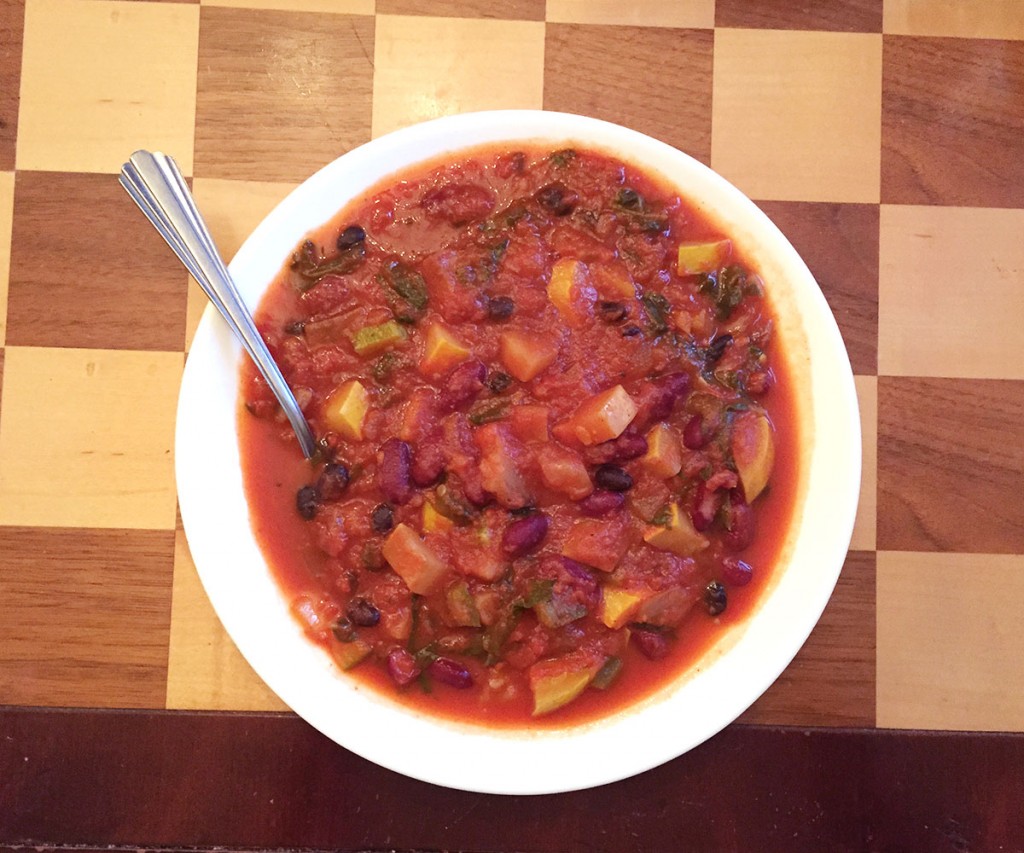 A bucket of fries. Anytime I get fries in a giant bucket, I’m happy. 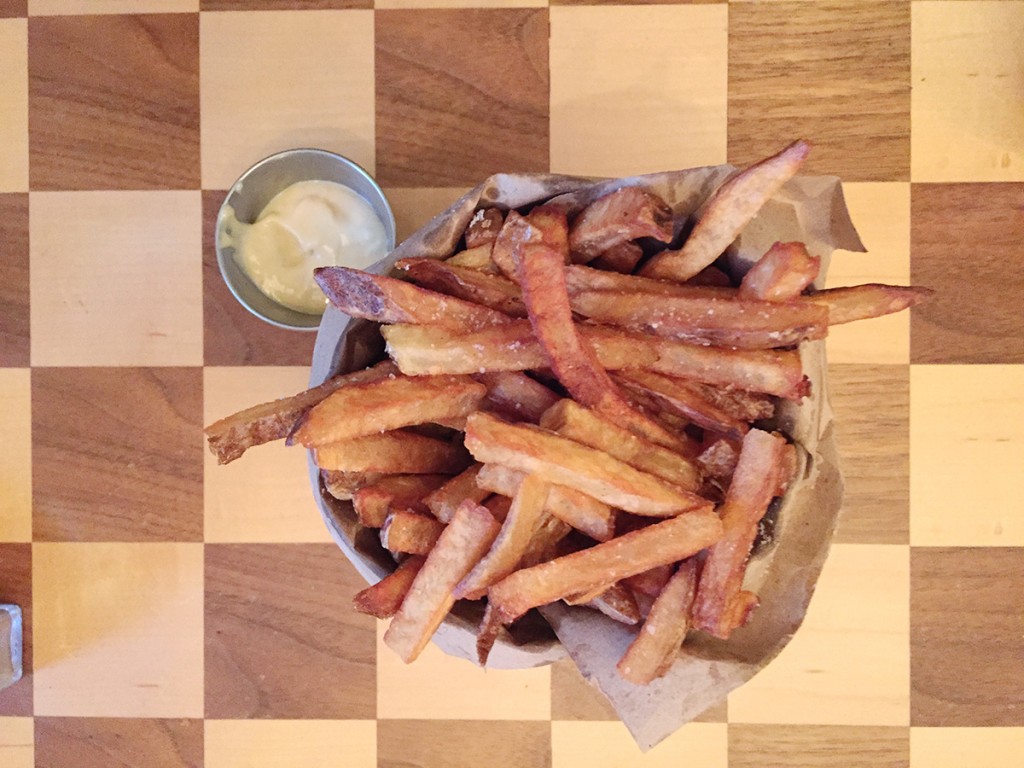 There are a couple other places in Doylestown that I like but our trip home this time was so brief we were only able to go to these places. Next time, though!