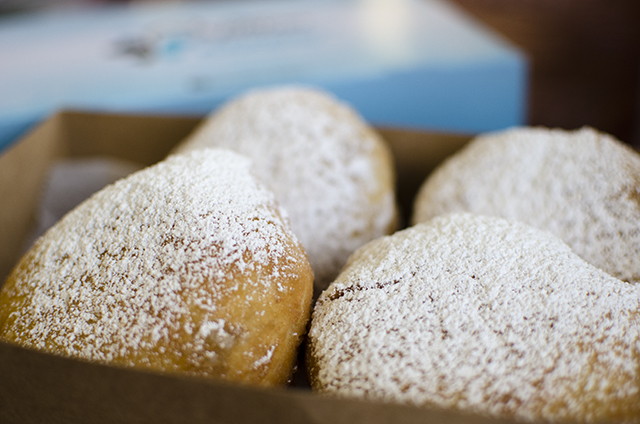 You know what everyone loves? Fried dough. I’m pretty sure every nationality or culture has its own version of doughnuts/beignets/etc, usually covered in sugar or stuffed with sweet, creamy filling. And I am totally happy to try them all.

There is no shortage of various fried goodies here from different cuisines. The LA area has a large Armenian population and clustered in Little Armenia near Hollywood and in the LA suburb of Glendale there are lots of Armenian bakeries. Some are well known for making ponchik, which are basically Armenian filled doughnuts. Ponchik are made with a yeast based dough fried in oil and typically filled with custard cream, although there are lots of other fillings like Nutella and different fruit jams.

Ross and I went to the North Hollywood location of Papillon International Bakery, an Armenian bakery well regarded for its ponchik. This location is in a small strip mall. They have two tables inside but it’s mostly a take-out or pre-order and pick up type place. 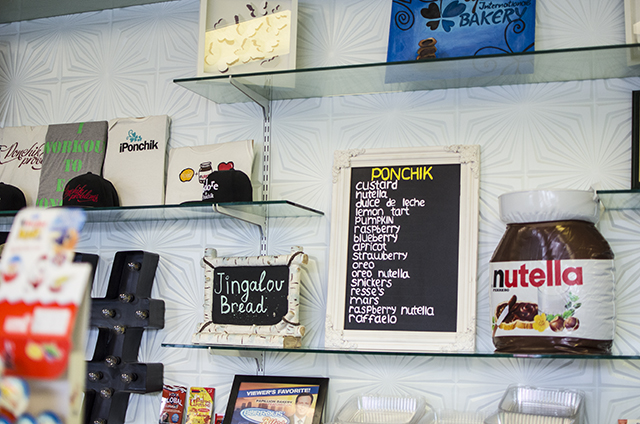 The ponchik flavor menu displayed in the bakery

We ordered four pieces: two custard, one dulce de leche and one strawberry. The lady told us it would take about 10 minutes, since they make them to order, so they are fresh. They sell a variety of other baked goods as well as the usual cakes but we were there for the ponchik! After waiting a few minutes, she called my name and showed me the box of freshly fried pastries, and I was surprised at how big they were. Each was about the size of my palm. They smelled AMAZING. Just imagine being surrounded by the smell of fried dough/batter with sugar everywhere. She suggested eating some right then and there since they just came out of the fryer, so she gave us some plates and we took one of the two tables in the store.

I took my first bite and it was sooooooo good. Steam billowed out since it was still so hot. The ponchik is hollow, as you can see in the picture below, and filled with custard.  While an American-style doughnut is denser and filled the whole way through with dough, the ponchik has a thin outer layer that is slightly chewy and fluffy. 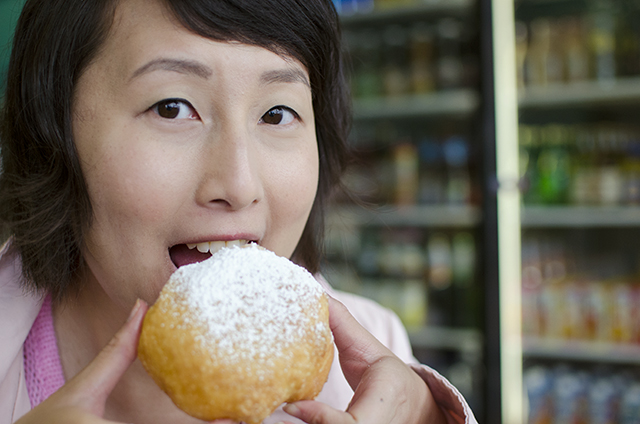 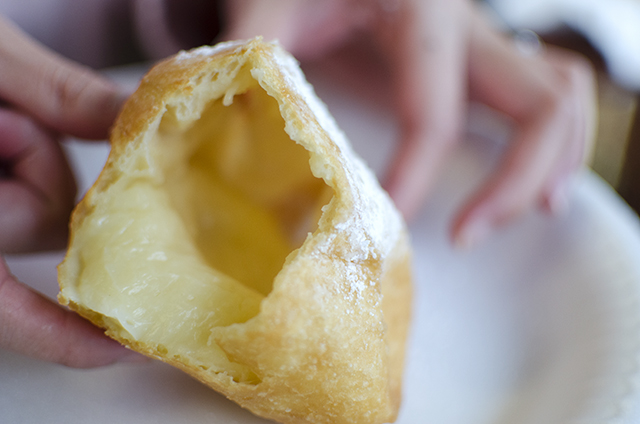 I only took a photo of the custard filled ponchik, but that was probably my favorite filling. I enjoyed the dulce de leche with its sweet caramel flavor. The strawberry tasted ok, but I probably wouldn’t order it again. I don’t really like jam filled doughnuts so it makes sense I didn’t love the strawberry ponchik. I preferred the creamy, thicker fillings like the custard and dulce de leche.

If you’re ever in the area and want to try some ponchik, I definitely recommend going to Papillon! At only $1.75 each, it was a delicious, inexpensive treat. Because it is fried to order, your ponchik will always be super fresh and warm. (However, I saved two of them to eat several hours later and even at room temperature they were still pretty tasty. I recommend eating them within the same day though; I think they would get too hard or stale after a day.)