I love ice cream and different variations of it, and food mashups have been a big thing the past few years. Traditional ice cream sandwiches made with cookies have been around forever, so why not substitute cookies with discs of sugary fried dough? Two dessert shops in LA put their own twist on the ice cream sandwich, and I tried both! 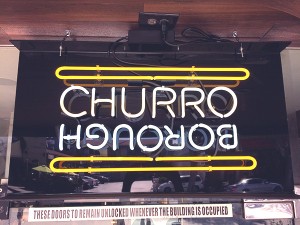 Churro Borough opened their brick-and-mortar shop in the Los Feliz neighborhood earlier this spring to much fanfare, after operating as a pop-up in various locations around the city.

The shop is small, with one bar counter inside the store facing the street and right outside are several small tables. I read that lines have been super long, but when I went on a weekday afternoon with Ross, there were only two people in front of us. That’s my usual strategy for trying new/trending places — go at off-peak times. I generally don’t care about being the very first to try something, especially if there are huge crowds.

I ordered one churro ice cream sandwich, and you can pick the flavor of ice cream. I decided to stick with the vanilla custard ice cream, but the matcha green tea flavor caught my eye, as that would make a pretty interesting Latin-Asian combination of flavors. Oh well, next time! Ross ordered a Raspberry Jamaica paleta, which I forgot to take a photo of, but it was a really beautiful shade of dark, deep magenta-red.

The churro ice cream sandwiches are made to order to ensure freshness, so it took a few minutes for the churros to fry up. But it was well worth it… 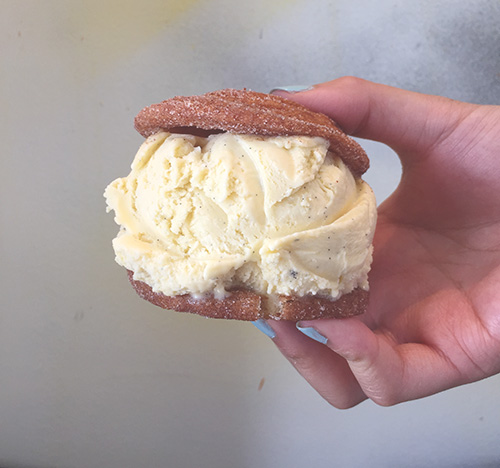 YUM. Despite being sandwiched between two discs of just-fried dough, the ice cream didn’t melt quickly. Nor was the ice cream frozen rock hard to counteract the heat from the frying. I estimate it was probably about a half-cup of ice cream. It was about 4 inches in diameter and well-seasoned with cinnamon-sugar — it was a light coating that wasn’t too heavy on the cinnamon (I have a weird thing about strong cinnamon flavors) and I wasn’t dusting off cinnamon-sugar powder everywhere. The churro discs themselves, since the dough was piped into a flat circular shape, didn’t have the crunchiness you get sometimes from eating regular churro sticks. The churro discs were soft enough (but still had a little crispiness from being fried) so that when I took a bite, the ice cream didn’t squirt out the sides.

The vanilla custard ice cream had a rich, creamy vanilla taste to it and was flecked with vanilla beans. It was a good pairing with the churro discs. I hate ice cream that tastes watery (looking at you, Nice Cream in Venice) and this was definitely dense (in a good way) and full-bodied.

Ross’s Raspberry Jamaica paleta was also very refreshing. I took a bite and it was a good mixture of sweet and tart. I could really taste the raspberries. This is why you drag your partner along to food outings, so he can order something else and you get to try more than one thing. 🙂 I wanted to try all the other flavors of ice cream there (and the guava lime paleta!) but I can’t eat everything in one sitting, unfortunately. 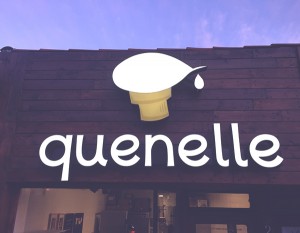 The special item is only available at the Burbank location on Wednesdays from 5-8 PM. Ice Que serves it Tuesday/Thursday from 5-8 PM. I went to Quenelle to try it a few weeks ago. We arrived and saw a bunch of people outside the shop happily munching away on their ice cream sandwiches.

I love funnel cake, so it was only natural for me to want to try this. At the time, they offered only two flavor options for the ice cream filling: strawberries and mascarpone cream or blueberry pie. I was torn (as Quenelle’s blueberry pie ice cream is SO GOOD) but I chose the strawberries and mascarpone cream, which I’ve had before and is also good.

The funnel cake ice cream sandwich was sprinkled with powdered sugar and placed in a paper holder. 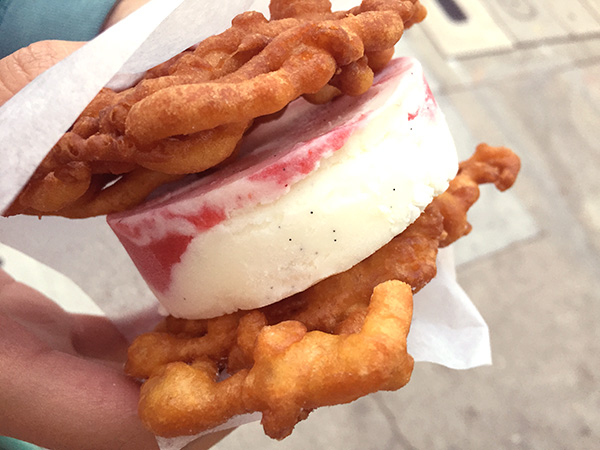 It was very good (when is fried dough and ice cream ever bad?) but the sprawling shape of the funnel cake sandwich pieces made it a little harder to eat than the churro ice cream sandwich, which was more sandwich-like. Quenelle’s was a little larger than the Churro Borough sandwich, but had less ice cream as the ice cream was pre-formed. The ice cream didn’t melt too fast and the strawberry swirl and mascarpone wasn’t too sweet; it complemented the sweetness of the funnel cake. One quibble is I would have liked more powdered sugar on top of the sandwich, to really mimic funnel cake.

The funnel cake itself tasted just like funnel cake you get at the carnival. It wasn’t dripping in oil (I’ve had some nasty funnel cake that oozed oil before) and was the right amount of crispy outer shell and soft interior.

Who wins? Well, they were both really tasty but I would say Churro Borough edges out Quenelle because their “bread” for the ice cream sandwich held together better and was a little easier to eat. I would eat both of them again in a heartbeat, though!